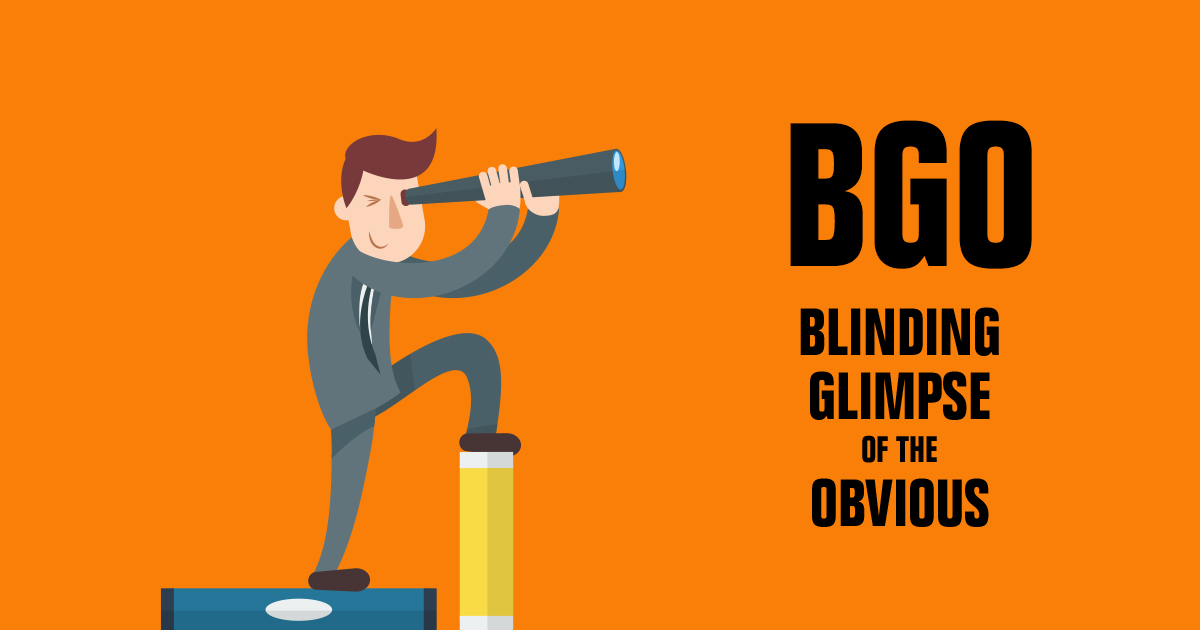 Why the alphabet soup post title you may ask?

The answer is that I did not want the title to give the reader a Blinding Glimpse of the Obvious (BGO). Or be guilty of pre-mature ejaculations (PME) when it comes to what has been a core function of my professional life over the decades – MR (Market Research).

I first encountered the term BGO working alongside Anil Kapoor the legendary MD of Ulka (now Draft FCB Ulka). Anil is both a marketing and an advertising man. And in both avatars he has quite a grouse against market research as conventionally practiced.

The gist of his argument, two decades ago, was that market researchers like trigger-happy Western gunslingers, shoot out methodology, sampling and questionnaire design much too prematurely. Destroying any probability of satisfaction from the exercise for any party concerned.

Cut to a couple of decades later.

Alas! Nothing has changed!

Last week I attended a seminar of sorts where a global market research agency was celebrating the anniversary of its syndicated panel. They decided to structure much of the panel around their agency people projecting various winning aspects of their panel.

The presentation was very illuminating.

In the sense they highlighted the dark side that has been haunting market research for decades now.

The complaint is not only that much of market research findings do not have any implications in terms of planning and action but also the parts that do are well, BGOs, i.e. they are either too basic or already known and factored into marketers plans and initiatives.

Example from the seminar: Robust sampling design, impeccable probe instruments and high-end analytics told the research agency that the two key factors driving the use of OTG (On The Go) packs are cost and convenience!

Now what is the poor product manager who has worked tirelessly for the past 6 months on creating this SKU to do with this umm.. BGO?

Or for that matter the advertising planner or creative hard-pressed for a new thought for the fifth OTG to be launched in the category do with this gem of a PME?

The BGO problem can be, I think, traced back to the very beginning – the formulation of the research brief.

One positive thing about most research briefs, as they are conventionally produced, is the fact that they are brief. “Let’s find out” the laconic Dick Tracy line could be a good summation.

If it is qualitative research, it usually is let’s find out what such and such kind of persons thinks, feels and do about such and such category and so and so brands.

And if it’s quantitative than let’s put reliable numbers to the answer.

Well, very much like a murder investigation beginning with let’s find out who did it.

And the answer being sought being a conclusive “the murderer did it”.

I believe that any research study must be preceded by a long in-deth investigation into the category, the brands, the usage & attitudes, the sales trends, recent and upcoming disruptions etc. before any though is given to a research study or study design.

It is the process of interrogating the people associated with the brand and the category. They know the market and the consumer better than any researcher would know a priori.

Many a time the brand custodians know their brand, their market and their consumer better that what they themselves think the know! It just needs good interrogation to explicate the knowledge and the insight.

Instead most classical research studies begin with designing a study that will tell the research agency what it, the research agency, does not know about the category, the consumer and the brands and then spit it out to the client in gooey balls of BGOs.

To my mind what a research agency critically needs, most of all, is a first class team of investigators coming in right at the beginning of the process.

Instead, it is telling that conventionally in market research, “investigator” is the term used for the guy at the end of the chain who asks the questions after the study has been designed and questions formulated by someone higher in the chain.

The first critical shift in mindset required is for the investigation to be right at the beginning of the quest and run by highly skilled people who are very near if not the top of the market research agency’s food chain.

To my mind this approach to research deserves a label and acronym of its own. How about Strategic Research (SR)?

Right SR it is then. SR starts with interrogating the strategic landscape to pinpoint the key dynamics and identifying the forks in strategic choices.

For example, for a failing amusement park located in a big city one key fork in the strategic landscape could be

The next step in SR would be to determine whether the key decision makers have for any reason decided not to go down a particular fork of the road. In the above example, say infusing more capital into rides is not feasible as the organization is resource constrained.

Even among the forks remaining as choices, a particular fork may be ruled out by further interrogation. For example, the investigation might conclude that for a price model change to increase revenue, universal awareness of the change would be required. This would entail large outlays on advertising. Without universal awareness, the pricing model change would lead to sure-shot revenue loss. Given capital constraints, the road down the fork of pricing model change is precluded simply by recognizing the implications.

While deeper interrogation might lead to the negating a particular fork as a valid choice, it might also lead to the emergence of a choice which does not need any further confirmation.

This raises a key question of research agency fee structure.

In SR, interrogation might result is decisions being taken without the need for field research. How then does the agency get compensated?

One solution is for a SR agency needs to work on a retainer arrangement. Where it’s strategists i.e. its investigators, are part of the client business and marketing strategy team.

One more point before I close.

A decision taken at one fork always opens up other forks for further investigation and if needed research. In the amusement park example, the decision to close the big city park and monetize the considerable brand equity through fostering a franchisee network of parks in smaller cites opens up a whole slew of forks that need resolution.

Resolutions that lie not in BGOs, PMEs or even MR but in astute SR.